Okay, kidding, but for Duncan, maybe it is.  You see, Desmond, baby brother Desmond is now bigger than he is.  I’ve tried to get a good picture of them for a couple weeks, but was slightly suspicious due to Dunc positioning himself uphill of Des each time I got the camera out.  I’m on to your tricks, now Duncan!  There is no way Des will stand without bouncing, but at just under five months old, I think he’s now about 15″ tall.

It's only his ears! I'm still taller than Des, really!

Des is a typical teenager.  He slouches.  So it’s been difficult to actually see that he’s gotten taller.  To make things more confusing, for quite a while his back end has been taller than his front, so he looks like he’s perpetually going downhill.  I’ve noticed the front landing gear is starting to catch up lately, so he’s beginning to lose a little of that funny stance, but some is still in evidence.

Maybe the third picture of Des standing still, ever.

Being taller in the rear isn’t slowing Des down one bit.  It looks like his back wheels are perpetually trying to overtake the front.

In the last few weeks, I’ve continued his foundation training with a few sends and some outs.  (Because I’m gonna need to be able to cut corners to keep up with fuzzy Mad Max).  We’re also working on shaping Cik/Cap, Sylvia Trkman’s method of training tight turns.  With Dunc, I depend on body language and good timing <cough, of course I have good timing, cough> to succeed with tight turns, but Des is hinting that he’ll have the ground speed that will demand earlier turning cues.  Here’s a short video of our recent work.  I just love that he’s already letting me run the other direction while I send him forward to that classic agility obstacle; the bucket. 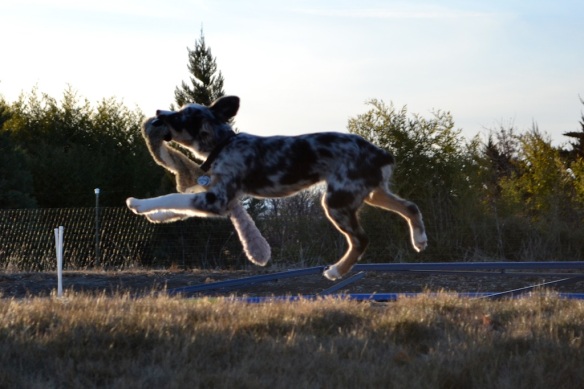 I can fly! I don't need a magic feather!