When my surgery date was set, I had five loooong weeks to wait.  That day, I set a goal of getting Desmond to full height on his dogwalk and closing Des’s channel weaves completely.  While I didn’t want to rush him, for me, a deadline is unbeatable motivation.  As a serious bonus, it’s provided a welcome distraction full of happy puppy thoughts and given me a reason to get out there Every.  Single.  Day.   As if I could resist this face… 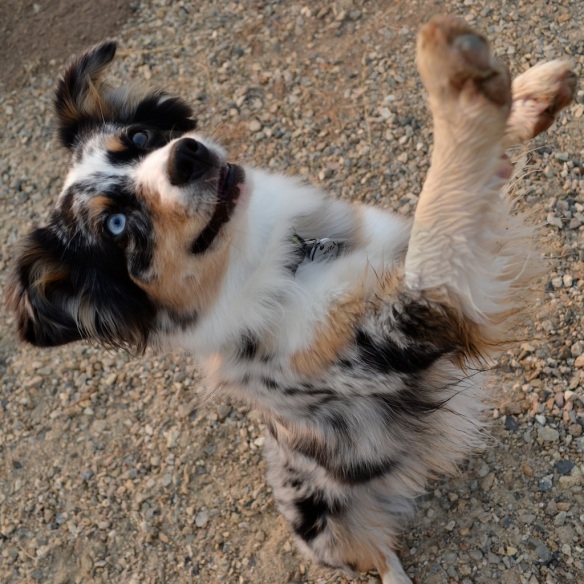 There’s nothing like knowing I’m going to be a chair jockey for a couple + months to motivate me to get outside and run.  And in the last five weeks, that’s exactly what we’ve done!

Des and I began working weaves in earnest around his first birthday.  I’d happened across the channel method as a part of the online classes I’m taking, and decided to give it a shot.  I worked him a couple times a week for a few months, succeeding at some gnarly entires while gradually closing the channel, yet leaving it open enough not to actually make him weave a lot.  In November, I began to close about an inch a week, and he weaved his first completely closed set right after Thanksgiving.  Since then, he’s blown me away with his ability to hit entries…at speed or with the meanest angles I can dream up.

And his running dogwalk?  Each time I’d raised the height of his dogwalk in the previous month, he never flinched, adjusting quickly to maintain his lovely striding.  That is, until we hit 45″; a mere three inches short of full height.  All of a sudden, things fell apart.  His strides became shorter, and he missed the contact over and over.  I pondered what to do. I promised myself he was *not* broken, no matter how heavy the sinking feeling in my stomach.  He needed to build back up his confidence.  With Duncan, I would have dropped the height and built back up a little less quickly.  But this is Des, who charges at most things like his fur is on fire.  So, I decided to take my cues from Des and do the same.  For several days, I ran alongside the dogwalk like a madwoman, making a heck of a racket, and most likely worrying the neighbors and scaring the wildlife.

But it worked.  Des got his striding back and began to fly.  A week later, we raised it to FULL HEIGHT!

More than six months.  Learning to see his stride.  Learning to reward a good stride.  Des learning to adjust his own stride.  Dragging myself out before sunrise to beat the heat, rushing home and running in my work clothes to catch the last few minutes of daylight…it’s been a long journey.  One that’s been truly worth it.  What?  Video?  Of course!

We aren’t done yet…we still need to work turns, but getting to full height on the dogwalk and competition weave poles were two large and rewarding hurdles.  Ones that will help carry me through the upcoming months of forced idleness.  While I may be watching Die Hard (hey, it’s a Christmas movie…) or Downton Abbey reruns, I’m sure a small part of my mind will be be doing mental handsprings over what Des has done.  And looking oh, OH so forward to running him the moment I’m able to do so again.

4 thoughts on “Weaves…Contacts…and a Deadline!”